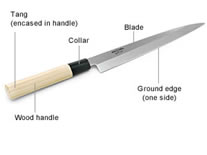 The best way to describe the difference between a an eastern style and western style knife is to look at them. The knife to the right is an example of an eastern knife, while Wusthof knives are examples of western knives.

Another example of eastern inspired cutlery is the Chinese Cleaver which was developed for a number of cutting purposes. It has a rectangular blade with a straight cutting edge with a slight curve for rocking purposes when mincing and dicing. The top of the blade is dull and typically used for pounding purposes and the wide side is perfect for smashing garlic and scooping cut ingredients.

The most prevalent knife in Japanese culture and cuisine is the santoku. Although there are three variations which are prominently used in eastern cuisine. The santoku has a long, medium width blade. What’s interesting about this knife is that it only has one sharp side versus Western style knives which are sharp on both sides. The reason for this is that the Japanese feel that a single sided sharpness is more effective.

Japanese Knives are made of materials from ceramic, which they later introduced to the west. A company called Kyocera manufacturers knives with a ceramic blade that is incredibly sharp and more durable then one would typically assume. Global, another Japanese knive company, manufactures a stainless steel blade that can hold a razor sharp edge. These knives are wonderfully balanced and beautiful to look at.

How to Chose the Right Knife for Your Kitchen

The balisong knife other wise known as the butterfly knife